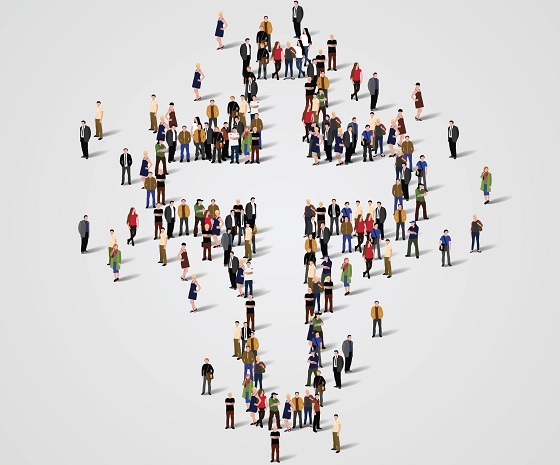 Loving God, I pray that you would inspire these words that I say that they would be an inspiration for your people. Where these are merely mine, I pray that no harm would be done. May we all hear a word that offers us some hope this day.

A couple of weeks ago, Kurt got our daughter, Lia, a plant. It was on the clearance rack at Lowe’s and he knew that it wasn’t in the best condition, but it sure looked like it had potential and it smelled like her favorite calming scent: pine. The fragrant plant is actually Rosemary pruned into the shape of a Christmas tree. Well, within the first week it had gone from a little rough around the edges to a little green left with lots of crumbling leaves. By the time we returned home yesterday from our few days away for Thanksgiving, the plant was looking pretty sad.

I, however, look at most houseplants that need TLC as a challenge worthy of my time and investment. After a quick google search, it became clear that this poor dying plant was in the wrong kind of planter, the wrong kind of soil, and it had been over watered. In addition to all that, apparently potted rosemary plants should be repotted at least annually and trimmed back, both in the pruning of the roots as well as the branches. Once I got into it, it was apparent that none of this had been done, maybe ever. Why is it that every time I adopt a plant from Lowe’s it feels like I’m taking in a rescue pet? (As an aside, purchasing a $3 plant that requires $15 worth of new soil is not a deal. Perhaps we need a new place to buy plants…) But after some careful tending and replanting, I think there is hope yet for this bedraggled plant.

Many, many centuries ago, God, the Master Gardener, adopted a chosen people who needed some rescuing. It was evident right off that these people were planted in the wrong place, were not being cared for properly, and would need a whole lot of TLC to bring them back to vibrant life. So God uprooted them from slavery in Egypt, planted them in the promised land, gave them life giving rules to follow and leaders to help tend them. There was hope for this bedraggled people. In the new soil of the promised land, the people grew and flourished. Generations were born, grew up, grew old, and passed on the heritage that they had received in the covenant with God.

But the people would get restless. They wanted protection from the warring countries around them and, instead of trusting God, they asked God for a king. God’s prophet at the time, Samuel, tried to tell them that this was a terrible idea, but the people were persistent. Once kingship is established, we begin to see two competing ideals in the biblical canon of the Hebrew scriptures: the elite class would write about the greatness of the kings - the expansion of the nation, the power and might of their military, the progeny and histories of the kingdom… vs. the prophets of God who would try to reign in the corruption of the powerful, remind the people of the basic rules of caring for one another, and warn against the impending doom of ignoring the Master Gardener.

A few weeks ago we talked about how the term “prophet” has been misconstrued in our culture to mean something completely different from what it was meant to be. Prophets were not in the business of divination, of seeing into an obscure future like reading tea leaves. Prophets were people who had been called by God, had powerful God experiences, and, through relationship with the divine, understood God’s hope for the world. They saw through the mystique of the ruling class, were not tempted by its paper thin power and decadent luxuries. They saw the oppression of the poor and the burden that the rich put upon them in order to sustain glamorous lifestyles. It was not some mystical, magical understanding. It was simply pure hearts who saw through to the truth of the matter. These pure hearts then spoke up and spoke out. They offered hope in two incredibly powerful ways: through truth telling about the corruption and through inspiration that God was still offering a better way.

It was not magical foresight to know that the division of people into the haves and the have-nots would eventually lead to ruin. It was simply common sense. It was not mystical wisdom to understand that a kingdom which chose to over consume its resources would eventually implode. It was easy to anticipate, but hard to hear, hard to act on, and potentially life threatening to tell the truth about. Prophets were as courageous as they were pure of heart.  We hear Jesus talk about it a few hundred years after the prophet Isaiah said the words we read this morning. Jesus said, “Jerusalem, Jerusalem, the city that kills the prophets and stones those who are sent to it! How often have I desired to gather your children together as a hen gathers her brood under her wings, and you were not willing!”

So the book of Isaiah has been handed down to us from so many centuries ago. It is a book in two parts that was almost certainly written by or about two different prophets: one who spoke truth to power before the Hebrew people were vanquished and exiled into Babylon, and another who roused the people returning to Zion fifty years later to find the inspiration needed to rebuild the desolate nation. We hear from both parts of Isaiah during the season of Advent as we await the coming of Christmas. Indeed, we hear both kinds of hope as we enter into this season.

Despite the Hallmarking of our sacred holiday, our hope as Christians is not in the happy endings of Hallmark movies nor in the boxes of things left under the Christmas tree. Our hope is in God’s design for us: a people who listen to God “that he may teach us his ways and that we may walk in his paths.” For out of Zion shall go forth instruction, and the word of the LORD from Jerusalem. [God] shall judge between the nations, and shall arbitrate for many peoples; they shall beat their swords into plowshares, and their spears into pruning hooks; nation shall not lift up sword against nation, neither shall they learn war any more.”

Our hope is like that of the prophets: we affirm that God is with those who are poor and oppressed and we speak out against the rich and powerful while at the same time learning the Way of God which the prophets taught and which Jesus ultimately lived out throughout his whole life story. We find hope in Christ and remember that we are the body of Christ, collectively, living out, through our whole life story, the Way of God.

The ancients put their hope in a future messiah, someone who would lift them out of the pain and suffering that they were experiencing in the world. They envisioned this messiah to be a great and powerful king of the lineage of David. What they, and all of us got, was a homeless child born in a stable because there was no room for his family at the inn. We received a poor child who grew into a homeless man who wandered from town to town preaching like a prophet: offering hope by way of critique and inspiration. Offering his entire life as a message from God.

Then the Christ did something else unexpected. He told us that even though he would die, he would be with us always. He commissioned us to be his hands and feet on earth, bringing hope to the world, from Zion to Babylon, in his stead.

The rosemary plant is originally from the coastline of the Mediterranean Sea. It is a hardy plant that really doesn't need much maintenance so long as the basic rules are followed. There are also legends that connect rosemary to the holy family around Christmas time. It is said that when they were escaping from the powerful King Herod who was trying to kill the Christ-child, Mary hid baby Jesus under a rosemary bush with her cloak over it and that her cloak hanging over its branches was what gave it’s flower the color blue and hence the name to the plant: the rose of Mary - Rosemary.

I do not know if the Rosemary plant I’m tending will survive and thrive, but I do have hope, I’m following some basic rules. I do not know if we will survive and thrive as a people, as a nation, as a species, but I do have hope. I know that The Body of Christ is alive and well and that God, the Master Gardener, will tend the people through us. We have some basic rules to follow as Jesus reminded us so long ago “‘You shall love the Lord your God with all your heart, and with all your soul, and with all your mind.’ This is the greatest and first commandment. And a second is like it: ‘You shall love your neighbor as yourself.’ On these two commandments hang all the law and the prophets.””

*Much of my research this week came from Marcus Borg’s book Reading the Bible Again for the First Time.

« Thy Kingdom Come! My Peace I Give To You »