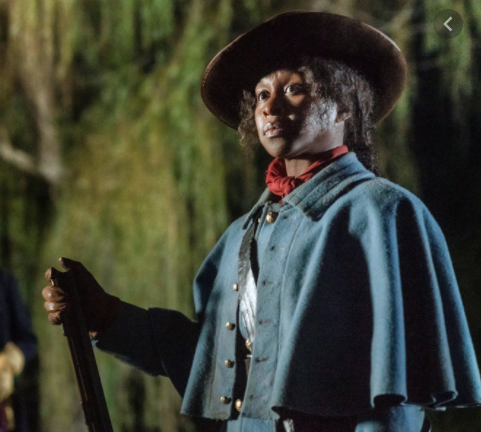 A Tale of Two Moseses

Beloved God, please inspire these words that they might, in turn, inspire others. Where these are only mine, I pray that no harm would be done. Amen.

A couple of weeks ago my daughter, Lia, bought a copy of one of her new favorite movies: Harriet, which came out last year. She had watched it in one of her classes and has been talking about wanting to share it with us parental units ever since. So we watched it together. It is powerful, heartbreaking, inspiring, hope-filled, and faith-filled. I was deeply moved. We got to the end of the movie and my heart was provoked to prayer: “God, give me the faith of Harriet Tubman.”

Most of us learned about Harriet Tubman and the Underground Railroad in our grade school days. I know that my imagination was impacted in such a way that I still look around old houses in the northeast and wonder if there might be a hidden room somewhere that might have been a part of that amazing story. Locally, Rokeby Museum in Ferrisburg does a phenomenal job at telling the story of a Quaker family, The Robinsons, that worked that farm and were faithfully and unapologetically abolitionists and part of the system of safe houses that helped get fugitive slaves up over the Canadian border and to freedom. I have always found inspiration in these stories of courageous, faithful people who were willing to get into “good trouble” by disobeying the immoral laws of the land. And, I guess, for me, it kind of runs in the family.

Today’s scripture passage is from Exodus, the story of the fugitive slaves running from their Egyptian oppressors with Moses leading them to freedom at God’s command. As I read this passage, I am struck by two things: how the storyteller talks about God’s power and God’s connection with the underdog, the oppressed, the slave. The bible is an amazing collection of stories and writings that have inspired people to take courageous stands in the name of their faith for millenia. We watch the heroics of the reticent Moses as he is called and sent, speaks truth to power and leads his people to safety. His faith leads him forward and God gives him wisdom and guidance, even with the pillar of smoke and flame to show the way. In this story, we see a God who loves and cares for the people who are being trod upon, leading them through the impossible to a better life. We also see the God who washes away the oppressor, those who uphold the law of the powerful.

In 2006, a rock star was invited to give the keynote at the National Prayer Breakfast in Washington D.C.. Sometimes prophets come in the garb of the everyday human, sometimes in the garb of the mystics, and even occasionally as a rock star. Paul David Hewson was born in Dublin, Ireland and experienced the trauma of warring factions first hand as a child of a protestant father and a catholic mother in a land that simply couldn’t lay aside religious differences. He saw how religion could be warped by the powerful for political ends and it has inspired amazing lyrics ever since. Over the last 40 years, he and his bandmates have toured the world, met with world leaders, raised money for impoverished lands, and, yes, spoken truth to power at the National Prayer Breakfast in DC. Having earned his nickname turned stage name from a gang he was a part of during his teen years, Bono of the band U2 has things to say. This comes from the National Prayer Breakfast speech in 2006:

“Check Judaism. Check Islam. Check pretty much anyone. I mean, God may well be with us in our mansions on the hill. I hope so. He may -- may well be with us in all manner of controversial stuff. Maybe, maybe not. But the one thing we can all agree -- all faiths, all  ideologies -- is that God is with the vulnerable and poor.

God is in the slums, in the cardboard boxes where the poor play house. God is in the silence of a mother who has infected her child with a virus that will end both their lives. God is in the cries heard under the rubble of war. God is in the debris of wasted opportunity and lives, and God is with us if we are with them…

It’s not a coincidence that in the Scriptures, poverty is mentioned more than 2,100 times. It’s not an accident. That’s a lot of air time. You know, the only time Jesus Christ is judgmental is on the subject of the poor. "As you have done it unto the least of these my brethren, you have done it unto me."” (https://www.americanrhetoric.com/speeches/bononationalprayerbreakfast.htm)

Leave it to a lyricist to sum up the biblical message so succinctly. “God is with the vulnerable and poor… and God is with us if we are with them…”

God was most certainly with Harriet Tubman. When she was a young teen, still very much a slave in Maryland, she suffered a head trauma at the hands of a slave master. This injury in turn led to a condition where she would randomly lose consciousness and have what she called visions where she believed that God was urging her on, giving her guidance, and offering her a deep peace that she was doing exactly what she was supposed to be doing for her people. Her faith led her to risk her life countless times in this effort and she would repeatedly state that she was willing to die, to lose every last drop of blood, in the doing of it. For this courage, conviction, and competence in leading slaves to freedom, Harriet Tubman was nicknamed “Moses.”

“God don’t mean people to own people.” We hear her say to her former master in the 2019 movie.

“the entire army of Pharaoh that had followed them into the sea; not one of them remained. But the Israelites walked on dry ground through the sea…” (Exodus 14)

Then [Jesus] looked up at his disciples and said: “Blessed are you who are poor, for yours is the kingdom of God. ...“But woe to you who are rich, for you have received your consolation.” (Luke 6)

During World War II, my Dutch grandparents were just teenagers in occupied Holland. I have been raised on my Oma’s stories of those formative years of her life. The challenges, the fear, the silly things that you wouldn’t expect, and the courage that it took to stand in the face of the oppressor have had a huge impact on my faith and world-view. My great-grandparents were not wealthy people, but they had a wealth of faith that convinced them of the need for subversive action in dangerous times.

At the risk of their lives and that of their children, they hid a Jewish woman in their home and helped with an underground hostal hiding young Dutch men, my grandfather included, who would otherwise be forced into the German army or sent to work camps. My Oma was one of nine children. One day some Nazi police came to their door to search for those in hiding. As my Oma tells it, when asked, her father called each child by name to come to the door. Seeing all of these children, the Nazis went away laughing because who would be crazy enough to take in anyone extra with so many mouths to feed on the meager rations of the occupation? The woman they were hiding was in the next room calmly peeling potatoes.

A quiet resistance to abusive laws, policies, and systems is in my blood. For me, it doesn’t need to be loud or showy. Resistance can also be quietly courageous. Like many involved in the Underground Railroad or the Dutch Resistance, I simply want to provide a refuge for those who are suffering from the injustices of worldly society and I want to help inspire others to do the same.

What are the stories that have inspired you? What is God calling you to do to be a co-creator of the Kin*dom? Do you stand with the poor and the oppressed? How? What visions are inspiring you to prepare a place for those who are seeking refuge? Let us dream, plan, and act together as a community of faith sent out to declare the good news to the poor! Amen.

« Grace Part Three: God At Work On Our Hearts We Must Love »